Monica Alexander to Speak at YWCA Bellingham Leadership Breakfast, May 1 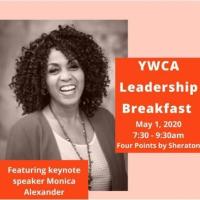 Monica Alexander, author of the recent Washington State Patrol Report on Missing and Murdered Native American Women and the only African American woman promoted to any rank in the Washington State Patrol, is the keynote speaker for the YWCA Bellingham Leadership Breakfast, May 1, 2020 at Four Points by Sheraton, 7:30 – 9:30 a.m.
Everyday YWCA Bellingham stands up and does the work to eliminate racism and empower women in our community. The annual Leadership Breakfast is a fundraiser for YWCA programs addressing issues of housing, inclusion and social justice. Tickets are $25/person and can be purchased online at ywcabellingham.org. For more details call (360) 734-4820 or email office@ywcabellingham.org by April 20 to ensure seating.

About Keynote Speaker Monica Alexander
Monica Alexander will speak on the topic Being the Change You Want to See. She is a former Washington State Patrol Captain, trainer, motivator, influencer and author of the Washington State Patrol Missing & Murdered Native American Women Report. Monica is currently the Division Manager of Advanced Training for the WA State Criminal Justice Training Commission. She is the first and only African American woman to be promoted to Captain in the almost 100-year history of the WA State Patrol’s existence. Her passion led her to work to highlight the 32-year backlog of over 10,000 sexual assault kits in Washington State, eventually helping push through legislation that funded an $11 million lab facility in Vancouver to complete work on the backlog. Her enthusiasm, passion and sense of humor are contagious.

Monica began her career with the Washington State Patrol in 1996 as a Trooper Cadet. She was commissioned as a Washington State Patrol Trooper on May 1, 1998 and assigned to the South Seattle freeway. In addition to her duties as trooper, Monica was the traffic reporter for KOMO-TV for six years. In 2003, Monica came in first on the sergeant’s exam and was then promoted on Aug. 15 of that year. She continued to work with the South Seattle freeway, office of government and Media Relations, and Office of Professional Standards until July16, 2013 when promoted to lieutenant and assigned to Field Operations Bureau Headquarters. Monica was promoted on April 28, 2015 to Captain in the Office of Government and Media Relations as the legislative liaison where she served until June 30, 2019. On July 1, 2019 Monica was assigned as the Human Resources Commander until she retired on August 16, 2019.
About YWCA Bellingham
YWCA Bellingham provides emergency and transitional housing for one of the most marginalized subsets of the local homeless population—unaccompanied women of all races alone and unsheltered. The organization’s historic Larrabee Residence provides short-term emergency housing, and longer-term transitional housing for up to two years. The 36 bed-facility is the largest program in Whatcom County dedicated exclusively to the special needs of unaccompanied women in a safe, clean and sober environment. YWCA Bellingham promotes equity and inclusion for all
Business Directory News Releases Events Calendar Hot Deals Member To Member Deals Marketspace Job Postings Contact Us Information & Brochures Weather Join The Chamber